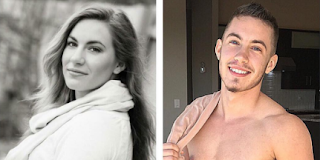 I hope everyone had a great 4th of July holiday yesterday. Things were super busy and I didn't get a chance to post a summary, but I would have posted chapters fourteen and fifteen together anyway. They both have to do with Jenna making the decision to become a man. Above is a before and after picture of trans man Jaimie Wilson. I read about him after I'd created the characters of Jenna and Elliot, but they have a lot of similarities. I'm including a link to his story. It's pretty interesting.

Here are your summaries:

Jenna gets the wires taken out of her jaw and Dana treats her to dinner out and a haircut. Later, they spend time talking about Jenna’s future. Dana points out that Jenna’s dreams had been based on what her girlfriend, Cara wanted. After some thought and a hair color change, Jenna decides she wants to go into the witness protection program as a guy, something she has always felt she was inside.

Jenna becomes Elliot Judson Cross in this chapter as she begins her transition from a woman to a man. Dana is completely behind her change and helps Jenna present herself as Elliot. Dana’s boss, Mark Jonas doesn’t recognize Elliot as Jenna until he sees the scar left by Jenna’s father. Jenna realizes that her acceptance of being Elliot means he will need a therapist to help make sure this is the right decision, but he is certain that being Elliot is the way to a happy future. Jenna becoming Elliot will actually make it easier for the FBI to protect him. For Elliot, he can finally be who he truly is without fear of what family and friends will say or think.