Patience is not one of my virtues. Although, if you talk to the people I work with at the library, they would tell you I have it in spades. If you ask my family, they will just laugh because they know I don't have any patience. But, it's one of those demons I deal with on a daily basis.

I mention this because I'm still "patiently" waiting to hear back from a traditional publisher about my next young adult lesbian romance. If I were self-publishing this story, I would probably already have it available. Still, the reason I want to publish traditionally is to get feedback from professionals about my writing.

Yes, I have fans who love almost everything I write, and I so appreciate them all. But, I guess I want the industry recognition now. Not that I expect to win any awards or anything like that. There are far too many other more talented authors in the lesbian fiction genre for me to compete. But, I would like to have an editor or publisher say, "Your story is something we want to publish."

This is totally an ego thing, I guess—kind of like going to college for someone from a family like mine. I could easily make more money and not have student loans that I will never get paid off if I would have just gone to work in a factory. That's where many of my family members have made a ton of money. But, I desperately wanted a college degree, and now I have two.

Even with my college degrees, I could go to work in a factory and make a lot more money than I do now, but I like my job at the library. And as much as I don't like people in general, I enjoy helping people, especially in times like these when everything is so uncertain for so many people.

While I'm "patiently" waiting, I'm also working on my next adult lesbian romance and a genderqueer story.

The genderqueer story has come about because of a friend who identifies this way. I've known him since he was a very little boy, as he is the son of friends of my ex-husband's and mine. The young man's parents were Godsends during very tough times brought on my ex-husband's eccentricities, and I will forever be grateful for the love and charity they showed my family and me.

As I've gotten to know this young man as an adult, he's opened my eyes to a part of the queer community that is often disdained by many. He has been lucky enough to find a girlfriend who is comfortable with who he is, but I can only imagine how hard that must have been. As he said, "It's a minefield out there." That's true for everyone, straight or gay, but I can imagine it's even more so when you don't fit into one of the pigeon holes society and our communities want us to fit into.

So I'm writing a tale based on his story because I think it needs to be written. That's how I got into this business to start with. More than ten years ago, when I began writing, Suddenly, there were very few HEA for young gays and lesbians, and that's why I wrote that story. I wrote Finding Jenna because there are precious few stories about transgender characters and even fewer that I not solely about coming out. I feel compelled to write this story for my friend and all the other queers like him who may not feel they fit into queer or normal society but who deserve to find the love of a soulmate.

I hope everyone had a wonderful Valentine's Day yesterday and was able to share it with someone they love. And I pray that everyone stays safe in the next week to come since most of the U. S. is under a winter storm warning, including us here in south-central Kentucky. 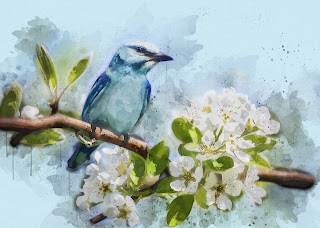